COLOMBIA'S PRICE FOR PEACE: COCAINE AND THE ENVIRONMENT

The reason is that the Armed Revolutionary Forces of Colombia (or FARC by their Spanish acronym) once controlled or influenced vast stretches of land in the Colombian Amazon, one of the world's largest swaths of tropical rainforest and a huge carbon sink. In those areas the rebels' presence precluded competitors from producing cocaine, a drug the FARC itself trafficked in, while also preventing the loss of forest cover that provided the perfect natural habitat for the group's brand of guerrilla warfare.

Now, with the FARC having swapped their balaclavas and AK-47 machine guns for suits and ties and the ballot box, the vacuum in those areas is being filled by a host of heavily armed groups driven by poverty in some cases and greed in others, who are illegally destroying the forest to make way for cattle ranches and coca plants, the key ingredient in cocaine. The result has been a free-for-all in the verdant wildernesses that were previously off-limits thanks to the bloodshed.

The increased cocaine production, along with the rising deforestation, is delivering a one-two punch to Colombia's environment. Making cocaine requires a host of chemicals including sulfuric acid, caustic soda, kerosene and sometimes gasoline or diesel, with the byproducts typically dumped in local waterways... 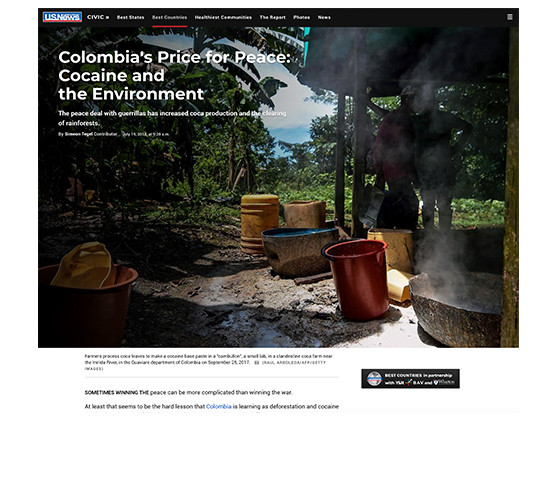 US, News and World Report